Motel Chronicles is a collection of short stories, poems, and recollections that work together to starkly outline Shepard's distinctly American worldview. This book is essentially a work of fiction, although it has a heavily autobiographical bent, as does much of Shepard's other work - particularly his plays. One of Shepard's strengths is his ability to bring a scene or memory to life with a sparing use of language and an aesthetic that is profoundly influenced by the landscape of the American West. I am very interested in this idea of how we relate to, perceive, are shaped by, and shape our landscape - both externally and internally. Shepard relates memories in distinctly visual language. I am interested in how this concept can be translated to film.

Stevens' poems are layered studies in perception. Some important themes are how man and nature effect and define one another. How the imagination and reality are inextricably combined. It sometimes seems as though Stevens sets up dualities in his poems, but it is more useful and less narrow when reading his work to look for how he works with the relationships between many ideas. There is one epic poem in particular that I think may inform my next project: The Comedian as the Letter C. This poem can read as the story of the life of it's protagonist, Crispin, as he travels through various environments (internal and/or external) and is changed by them, while changing them. In this work Stevens invokes the phrase, mythology of self. I'm still parsing out exactly what this means but I am intrigued by this way of describing the phenomenon of creating self.

While Cartier-Bresson is considered to be one of the first purveyors of the photo-journalistic style, I am interested in his work not so much as a representation of reality but an expression of the artists relationship to reality. First trained as a painter, Cartier-Bresson turned to photography after becoming enamored with the notion that a photograph could fix eternity in an instant. While this idea may have been somewhat naive, it led the artist on an inspired path of actively stalking and capturing his subjects. He did have an uncanny ability to witness remarkably candid moments, but he was not interested in capturing these events merely to convey the "truth". Inspired by the Surrealists, Cartier-Bresson sought the unusual and realized the potential for photography to create new meaning by taking moments out of context or juxtaposing unlikely subjects and objects together within the frame.

The Decision of the Eye - Alberto Giacometti (sculptor)

This book looks at the work of Alberto Giacometti in relationship with the life and work of Henri Cartier-Bresson. Giacometti's most emblematic work are the spindly sculptures of figures in movement and the sharp, narrow busts that look as though they've been carved (or worn) away to almost nothing. Insubstantial as they are, they have a powerful effect and speak to me of Giacometti's considerable angst concerning himself and his relationship to others. He once said of his work, quite simply, "the heads, the figures are but continual movement... they constantly remake themselves." I think one reason that Giacometti's work speaks to me is precisely because of his fascination with the transient moment and the perpetual transformation of things. He often seems to succeed in conveying a sequence of movement with a stationary sculpture because was profoundly aware of the impossibility of the task, "to trap, to possess something that constantly slips away."

Inspired by Sam Shepard's Motel Chronicles, the film Paris, Texas is perhaps one of Wender's best known works. It is essentially a road movie in that it uses travel as both a vehicle and metaphor for the transformation of the protagonist, Travis Henderson. The story describes a boomerang journey; Travis has travelled away from himself - by wandering through the desert in self-imposed exile - and must completely break down and submit to rescue in order to return. I am interested in this movie aesthetically for is abandoned and desolate landscapes, narratively for the way Sam Shepard's autobiographical abstractions have been arranged into a narrative arc that actually does them justice, and conceptually as a metaphor for transformation and revelation.

The Poetry of Solitude: a Tribute to Edward Hopper (painter) 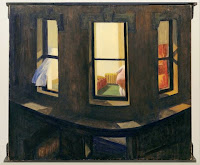 These paintings deal with the divisions between interior and exterior space. One one level this is literal, dealing with physical space where divisions are created by windows and doorways. On another level, Hopper's work could be read as a figurative exploration of the interior and exterior as it relates to the human body and mind. I am interested in Hopper's work in relationship to the cinema as it has informed many filmmakers (notably Wim Wenders) and it has also been theorized that Hopper himself was affected by the visual language of cinema. Wenders once said of Hopper's work, it "deal(s) with America not only on the surface, but dig(s) deep into the American dream, radically examining this profoundly American dilemma of appearances and reality.”